The Business of Interior Design

Interior Design, at the highest level, what we've all come to know as the inspiring cover images for every major shelter magazine on the shelf, the way we've been trained to think we "ought to live", is a business like any other. Designers and decorators at the top of their game are rewarded for the effort and hard work, and publicity, especially publicity in magazines like Architectural Digest, Veranda, and World of Interiors can catapult your career - as it did for Michael S. Smith, who was given the contract for the redecoration of the living quarters for the Obama Family.

After my post about the stunning redesign of California designer, blogger, and all around great guy Mark D. Sikes, I felt I needed to write this post as a response to comments about the wastefulness of the redesign.

In 2001, the world first came to know the little Los Angeles home of designer, Mary McDonald when it scored the cover of the now defunct House & Garden magazine. 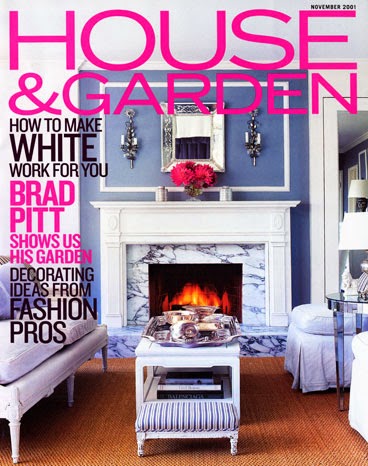 Mary McDonald
﻿
A calm, and soothing space built on the Mary's signature three color palette. Here she chooses a soft gray and white, with pops of pink. The room is carpeted in wall to wall seagrass, something that's important to note for later. Even Mary donned her pink silk pajamas for the shoot: 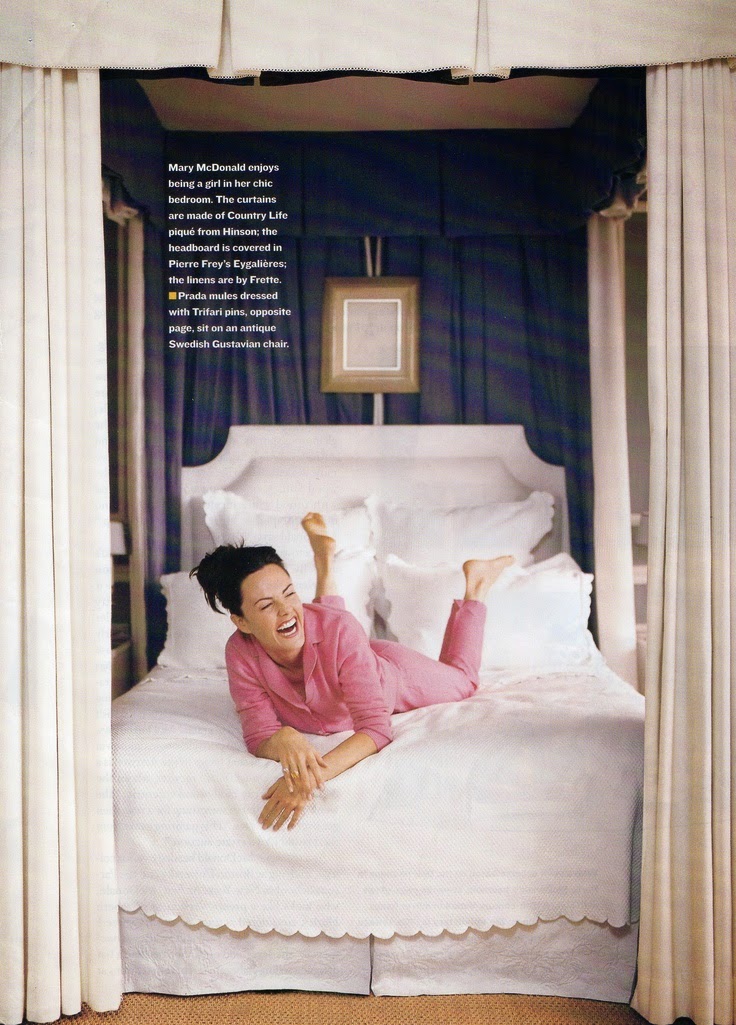 The canopy bed is a signature of Mary's. Simple construction and attached directly to the ceiling, this is something you see in a lot of Mary's rooms. Again here though, all white, with a touch of gray (although these scan's make it look navy). If you're interested, the wall color is Benjamin Moore Gull Wing Gray. It's a sophisticated, not overly feminine bedroom with a lot of appeal, one that I'm sure House & Garden was happy to have as a cover feature. 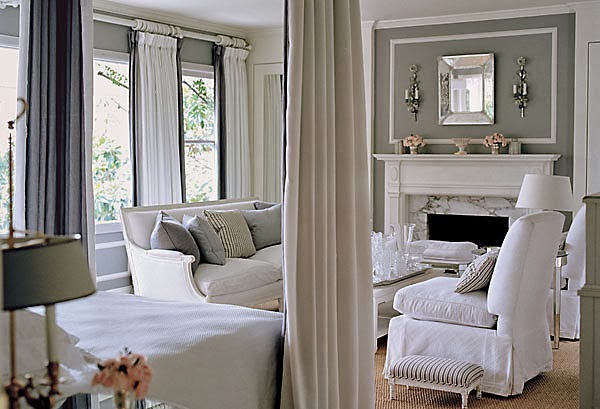 In this photo of the same space, you can see that the walls are actually a beautiful dusty gray color, with very little blue to them at all. The furniture is very fine, the linens of exquisite quality. This is first round of décor for Mary in this room. Before, (when she purchased it) it was pretty bland. She added all of the molding detail, the fireplace, and the mirrored closet doors, and of course added a lot of drama with that canopy bed. 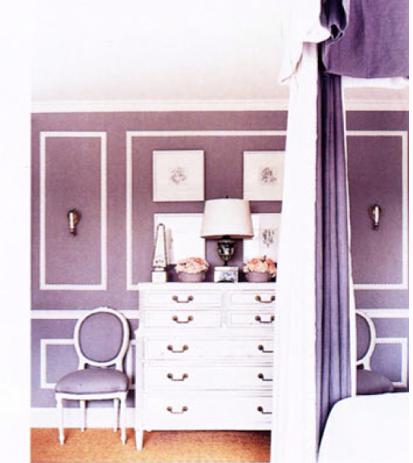 Beautiful painted French furniture, upholstered in fabrics that meet that whole tone on tone vibe Mary is known for. The molding detail gives the room a real Paris apartment feel, which is what she was going for, and what she inspired. The room was absolutely charming and timeless, right? Yes. It WAS.
After this was published Mary exploded onto the scene. She had a slew of wealthy clients, most notably the now divorced Efram and Kendra Harkham. Efram and Kendra hired Mary to do their home in Beverly Hills, and I mean DO THEIR HOME in BEVERLY HILLS! Then Efram had Mary work on commercial projects in his exclusive hotels. No expense was spared, and the project was featured both in her book, in multiple magazines, and on the sadly no longer "Million Dollar Decorators" on Bravo.
However, being the astute business person she is, Mary knew that the best way to get more high end clients, was to get more publicity. But once you're covered by one National publication, the chances of being picked up by another for the same room is very slim. So, Mary did what any good business person would do. She took the canvas she had in front of her, and created another masterpiece: 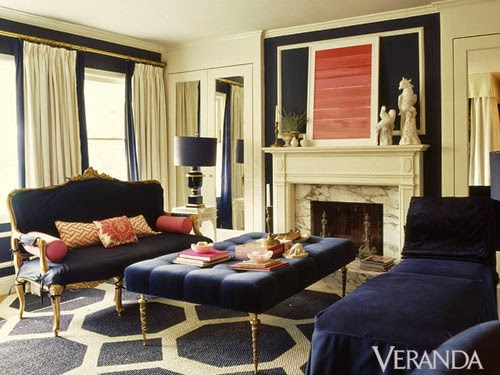 This time photographed by Veranda. So, here, the walls go dark navy, and the previous slipper chairs make way for a beautiful velvet slipcovered chaise lounge. The Chinese Chippendale coffee table is replaced with this gilded deco leg ottoman she found in Paris, tufted in the same blue velvet, and the loose cushioned settee replaced with this antique, gilded French piece, with a custom slip. The fireplace remains unchanged, but the art and accessories are all new with a pop of pink you'll find throughout the space. Perhaps the most ingenious of the design changes though, is the addition the painted pattern on the existing seagrass rug. Now, Mary made some smart changes here. While she changed out her curtain rod and rings for a more sophisticated brass, the curtains were reused, simply banding the lead edge of each with the new accent color, and the rug got a completely new look with the addition of paint. 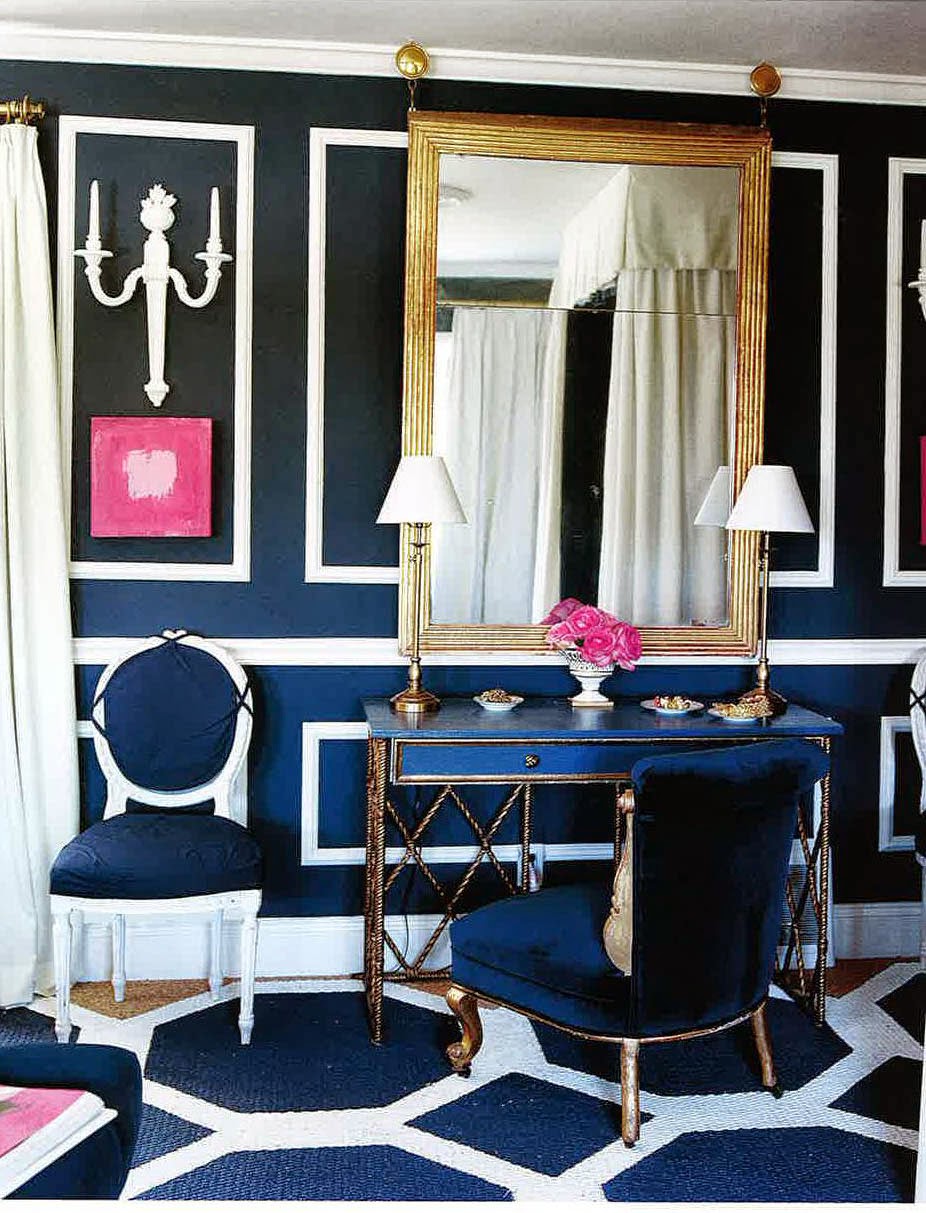 She changed out the dresser for this metal and wood desk. The painted french chairs are now slipcovered with more of the navy fabric from the settee. A gilded budoir chair becomes a probably never used desk chair and the art is replaced with this beautiful mirror found at the Paris flea market. ﻿
﻿ 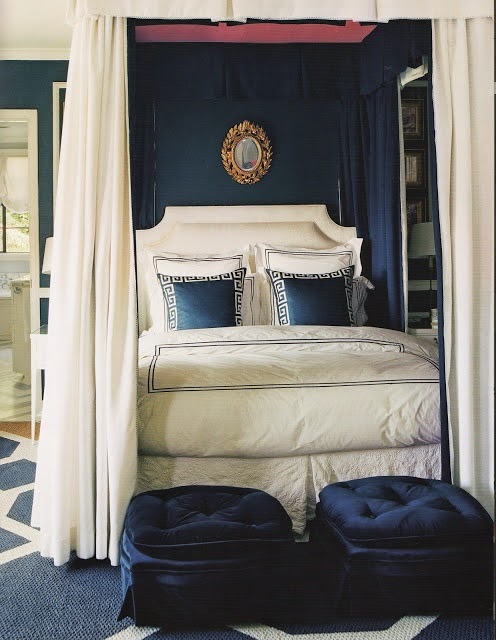 The bed stays mostly the same, with the same headboard, but new inner lining in navy to match the newly painted walls, the ceiling gets a pop of pink (another vibrant color choice she uses in dashes throughout the room) and tufted velvet ottomans find a home at the foot of the bed. The bedding here becomes more hotelier, all white with a simple box stitching in that navy and the small framed piece of art is replaced with a mirror.

Once covered in both Domino and Veranda, this bedroom once again gave Mary the quick shot of notoriety necessary to score more spendy clients looking for a designer of merit to work on their major projects. A brilliant business move on Mary's part. Just like in any business, if you want to make money - you have to spend money!

It's also important to note, that Mary was actually not living in this house at the time it was redecorated. What once was her main residence, became a guest house and office space for her when she moved in with her then boyfriend John Bersci, a Los Angeles developer. Not only was this house being decorated, the massive Beverly Hills Mansion they shared was being overhauled .. and was eventually featured on the cover of Veranda in November of 2008.

Now, when Mary and John split, Mary moved back to this house, and did what? Changed it all over again! This time while filming segments for Bravo's "Million Dollar Decorators". While the changes to this room prior to the move back in were small but significant, Mary made bold changes that have (to my knowledge) yet to be covered by a major magazine. 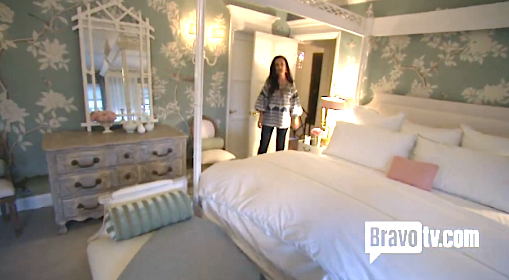 Gone is the molding added for architectural significance. It's replaced with custom, hand-painted, Gracie wallpaper. Gracie wallpaper is sold by the panel, and can cost you anywhere between $400 - $1100 per piece. This was not a CHEAP change, although a beautiful one. The painted seagrass is gone, in its place wall to wall broadloom in gray. The French desk is gone, now replaced by this small dresser. The chairs are new, replacing the white ones that once flanked the dresser, then desk; and the chinoiserie lattice mirror replaces the gilded French beauty she found in Paris. 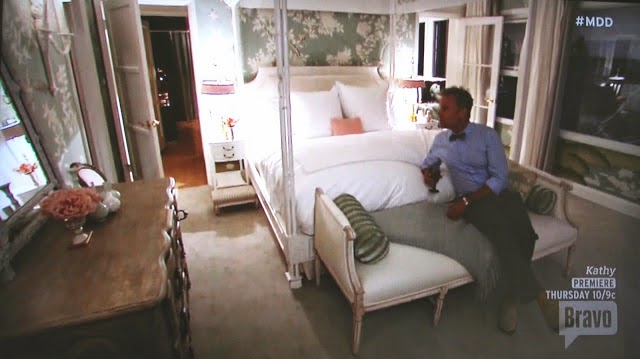 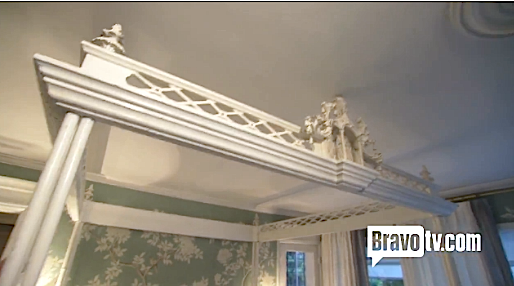 The canopy bed is replaced with this chinoiserie one that Mary had custom designed, and the foot of the bed gets a French daybed. Now if this looks familiar, there's a reason why, and I'm getting there! Mary kept her curtains, simply having the lead edge re-banded in a complimentary fabric to the blue-green undertone of the hand-painted Gracie wallpaper. 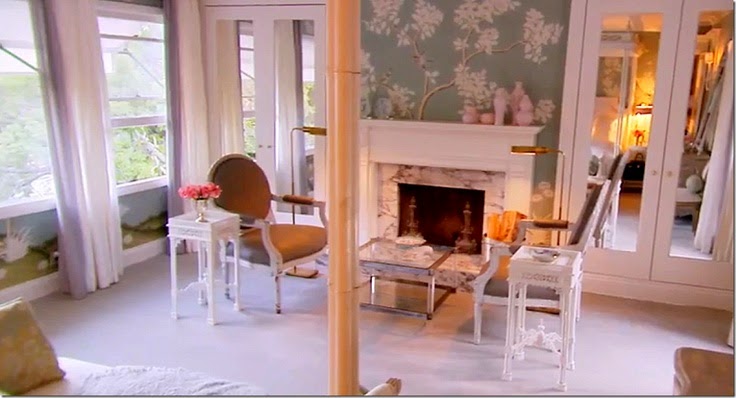 The sitting room is now just two antique cameo back bergere chairs with custom chinoiserie side tables that Mary also had designed. The one thing I'm not at all impressed with her is the square side table turned coffee table. The modern steel and Lucite construction just don't seem to fit in this space at all. However, if you watched the show, you know that Mary was putting this room together minutes before a dinner party at her house. In the only professional image I've been able to find of the space, she's replaced it with two antique French foot stools she once used in her home with John. 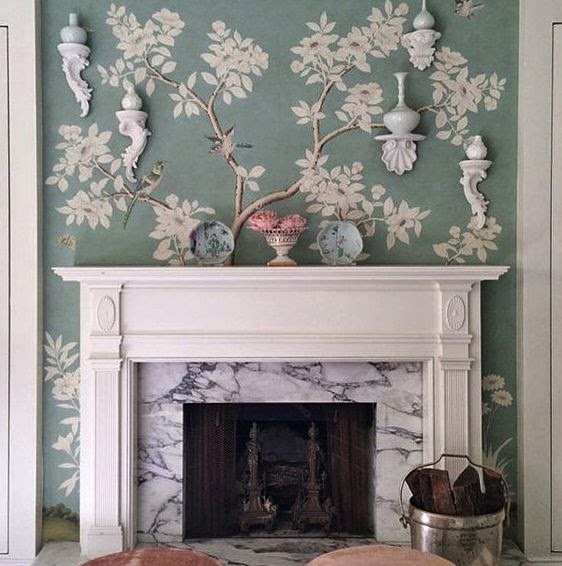 Here you'll see the fireplace as it most like exists today. Cleverly placed hand carved sconces hold demure pieces of pottery, and just below that silver fire bucket, you'll see the tops of those gorgeous velvet stools. 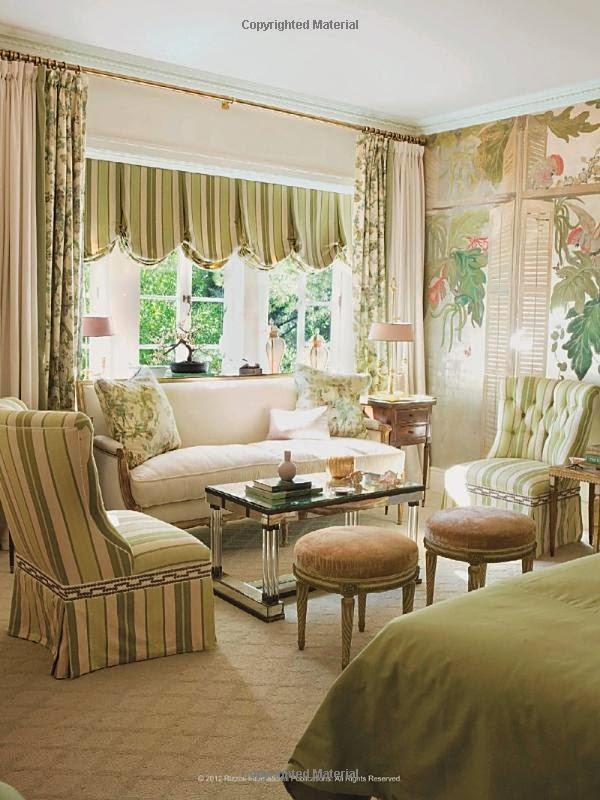 ﻿
Here they are in all their glory, used in one of the guest rooms of the home she used to share with John Bersci. The bed, well it's the same one that she used here with beautiful custom canopy and bed curtains: 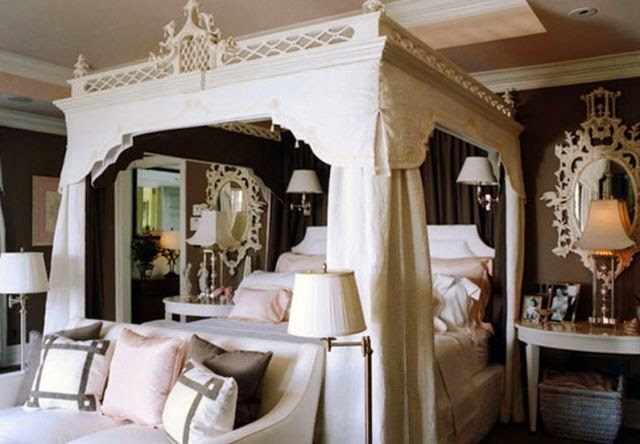 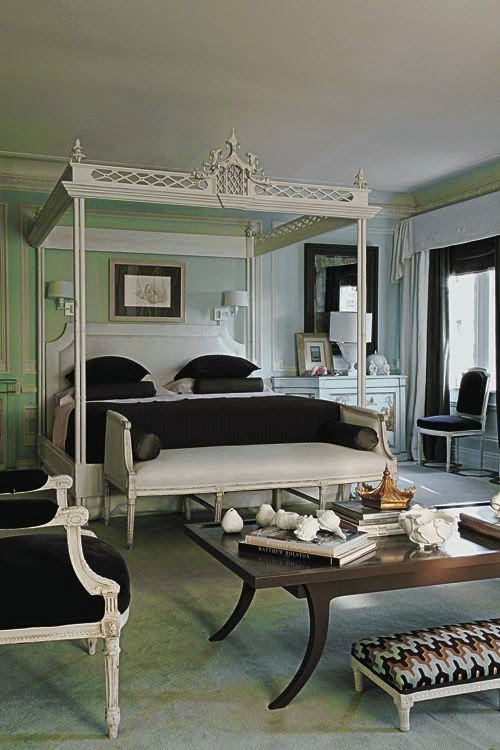 And again here, as it's seen in her bedroom with that that beautiful daybed. This post could literally go on for days and days. Not only did Mary redesign her bedroom, she redesigned her whole house at least 3-times. And she's not the only one. Martyn Lawrence Bullard went from this feature in Decor: 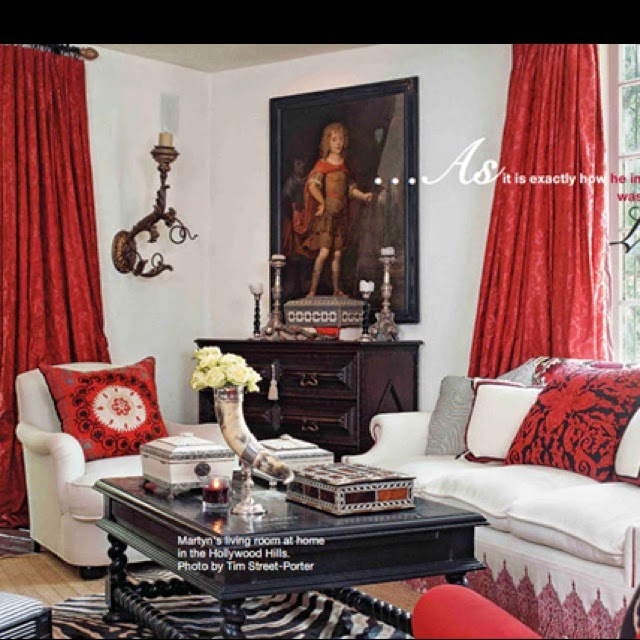 To this for Architectural Digest: 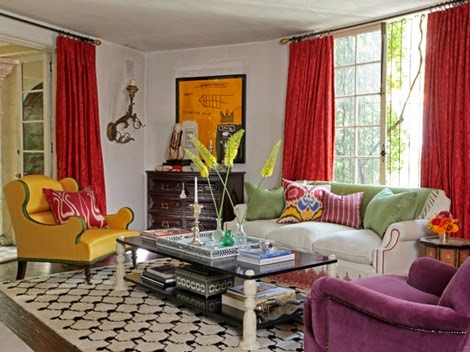 To this for Elle Decor: 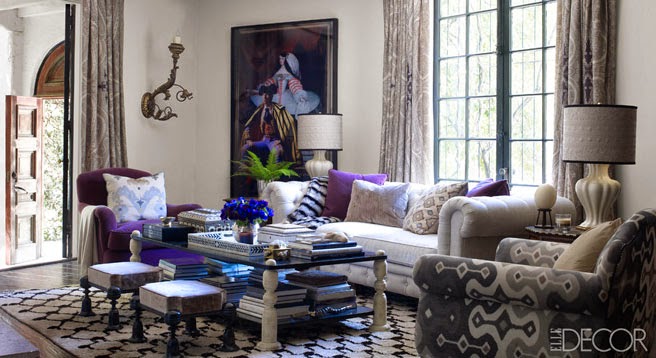 Darryl Carter, known for his timeless and classical style went from this living room for Southern Accents: 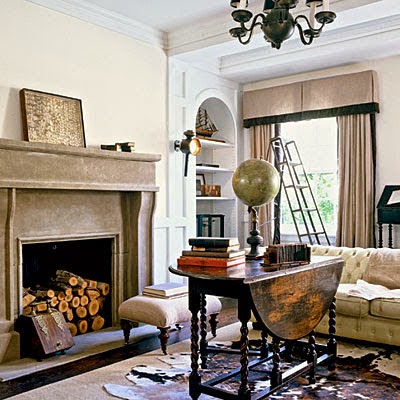 to office for Elle Decor:﻿ 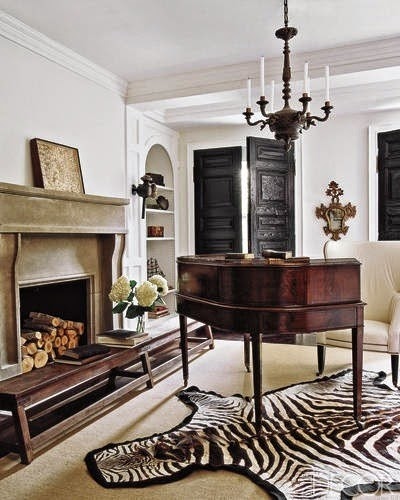 So, my point is this: while we may see these changes of seemingly perfect rooms, timeless and inspiring, their designer homeowners see them as a blank canvas, an opportunity bordered only by the plaster and lath behind the walls. Their homes provide them with a chance to try new things, explore new interests and ideas, and as business men and women, invest in their growing careers.
You might use designers like Bunny Williams, Charlotte Moss, or Michael S. Smith as examples of classicists who never change their décor. They, however, unlike Mary, Martin, Mark, Darryl, and other designers who redecorate their homes, have multiple homes to decorate. Michael S. Smith for instance, has homes in California and New York City, including a newly purchased apartment featured in AD. Charlotte Moss has homes across the country, and books (literally) devoted to the decoration of each of them. Bunny, master that she is, has her home in Connecticut, a home in the Dominican Republic, and her husband John Rosselli, a premier antiques dealer has had several stores. There's no need to redecorate, when you can simply move, or look to one of your many vacation homes for suitable magazine exposure.
While I can't speak for Mary, Martyn, or Darryl in their redesigns that I've shown above, I can tell you that Mark didn't waste anything in his project. Much of the project was clever reuse, moving items from one place to another, reupholstering or slipcovering existing pieces, changing the fabric and bedding, curtains, and furniture arrangement to illicit new movement and flow. He made several donations to local California charities, and has curated a One Kings Lane sale that I for one, can not wait to view.
I don't think that any of these designers, most notably Mark, were frivolous in their redecoration. Rather, I find them to be extremely talented artists who also have a knack for understanding how relevance and exposure dominates this industry, and our world in general. I applaud them for continuing to bring us, the public interested in living well, inspiring and beautiful interior design worth coveting.
Posted by niartist at 12:38 PM