Kris Jenner's House Before and After 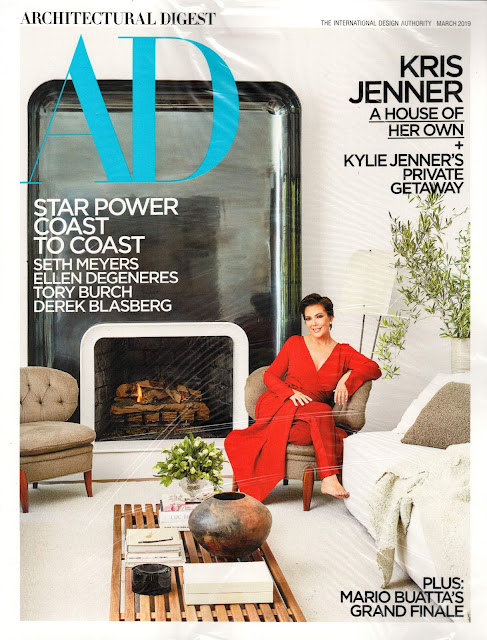 In February 2019, Architectural Digest had a cover feature on Kris Jenner, the "momager" probably responsible for the zeitgeist of reality television. The name Kardashian is now household, but has been high profile since the infamous Nicole Brown and Ron Goldman murders. Robert Kardashian was the best friend, and on the team of defense attorneys for football player O.J. Simpson. If you were older than 10, and lived in the United States, you knew about the O.J. Simpson case. It captured the attention of America due to the high profile O.J. Simpson had.

At the time of the trial, Robert and Kris had already separated, but as far as having the Kardashian name fronted in television history, I think we have to pay Robert that credit. It would be years after the O.J. Simpson trial, when Kris Jenner, then remarried (and since divorced) to Olympian transwoman Caitlyn Jenner brought the show "Keeping up the with Kardashians" to the E! Network in 2007. Now in season 16, the show has had critical reviews but still has some of the highest number of viewers of any reality show, ever. A success, no doubt.

So successful that it has secured a combined fortune for her children in excess of $1.5 Billion. BILLION! With all of that money the family has purchased some gorgeous California real estate, and hired some of the most notable in design to decorate. Kris recently purchased a newly built home in the exclusive enclave of Hidden Hills, Los Angeles. Hers and hers alone, the house needed to be a respite from her busy Hollywood life, so she enlisted the mother-son design team of Kathleen and Tommy Clements.

When I found the pictures of the house before the AD feature, I had to share the beautiful before and after. Ready? Let's do it! 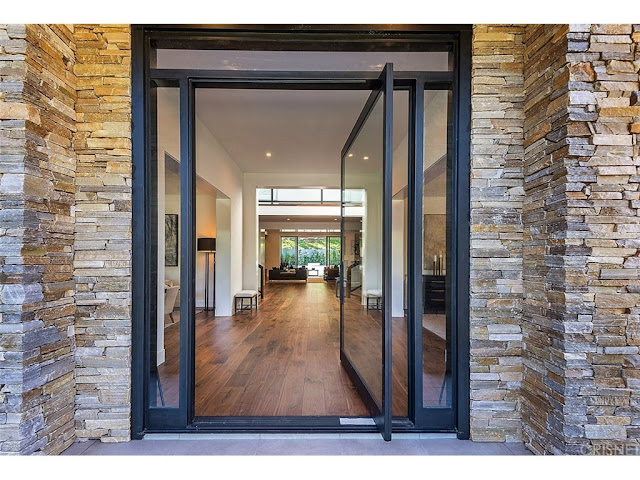 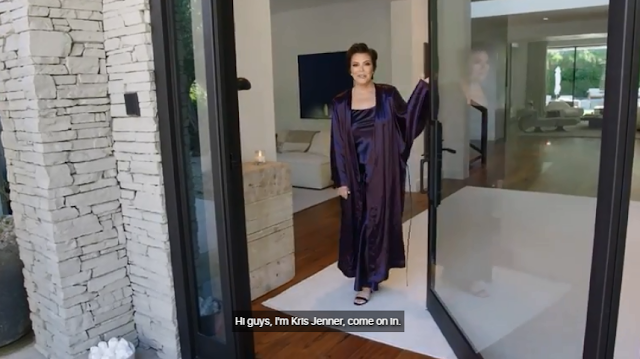 After - from the AD Video

You can see that some changes have happened on the outside before we even go in. The stacked stone facade of the house has been painted gray. A large entry is flanked by a living room on the left and dining room on the right. 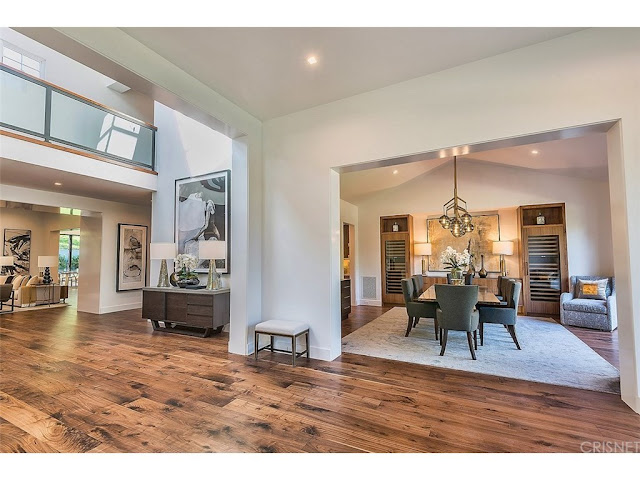 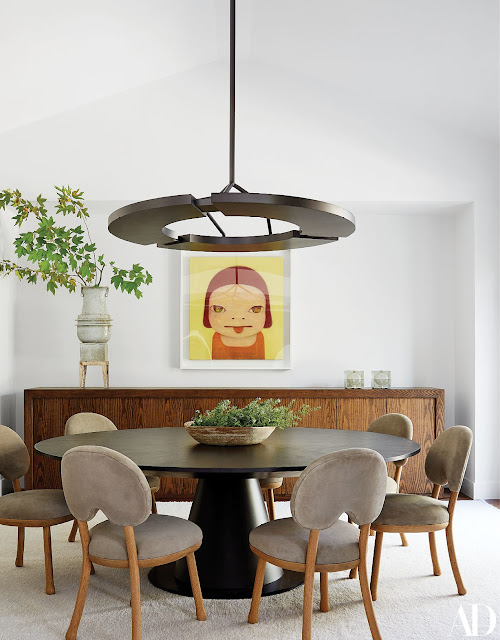 So before, the dining room had been staged with two wine fridge units flanking a buffet. Something built in and custom that while functional - wasn't all that attractive. Now the niche has a large, long buffet with a clean front and very simple staging. Beyond gorgeous. 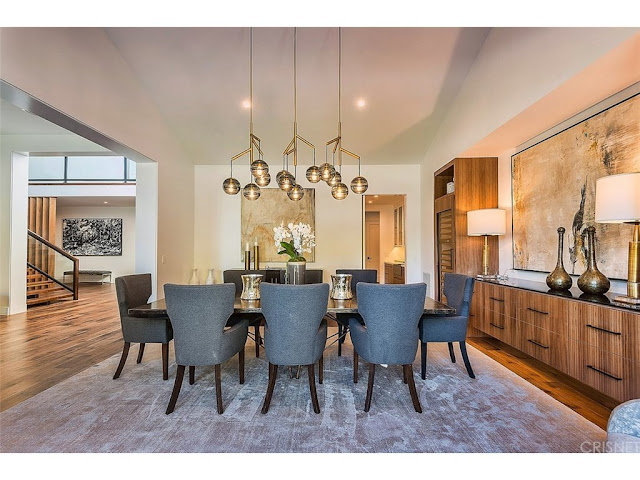 Another view of the dining room. 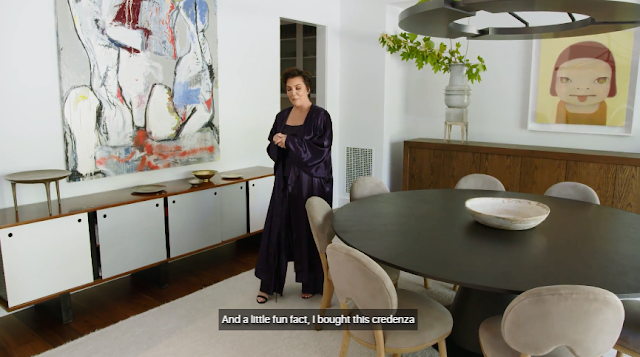 After from the AD Video.

Really love that they used a large round table in here. The room looks quite square. Square rooms = round tables. The credenza was a purchase from Ellen DeGeneres. 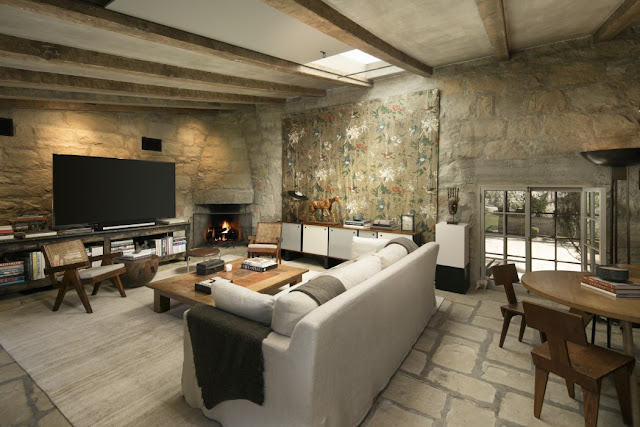 Here it is in the house that Ellen flipped in Santa Barbara, once decorated by John Saladino. 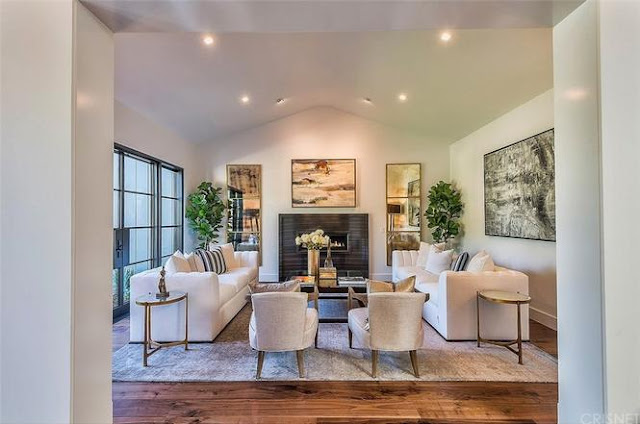 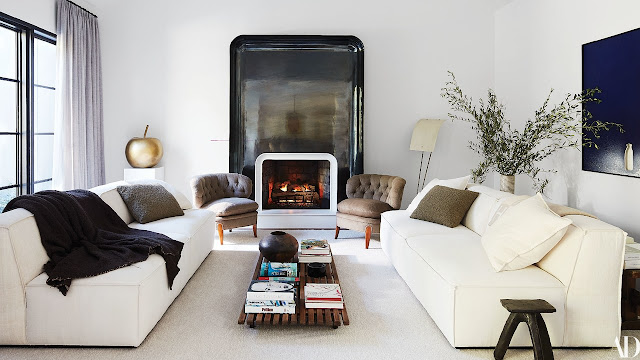 The mantel and fireplace surround are custom bronze. Curtains hang here to soften the hard lines of the all the metal. Again, love this and can totally see why Kris says she feels "zen" in the house. 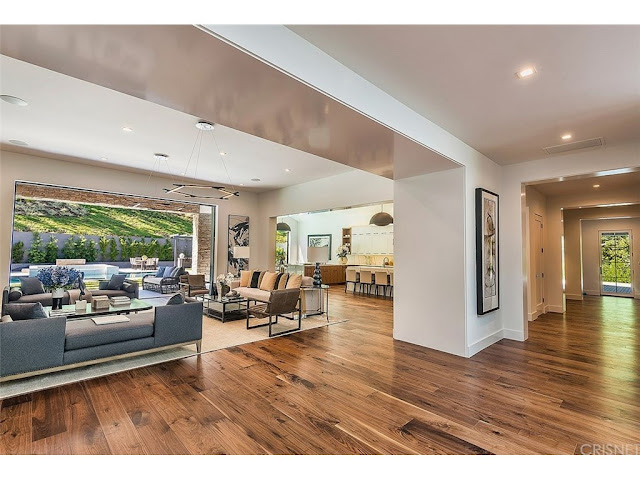 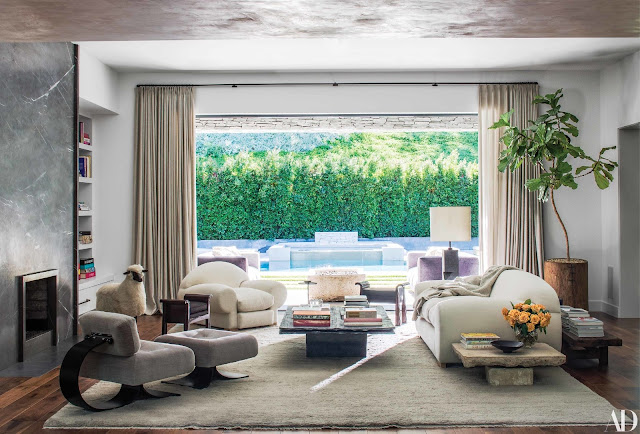 After - Decorated by Clements Design

I love this. To soften the modern and contemporary lines of the architecture and furniture, Clements design uses thinly lined linen drapery on the large opening from the family room to the pool. The biggest change really comes in the fireplace wall. 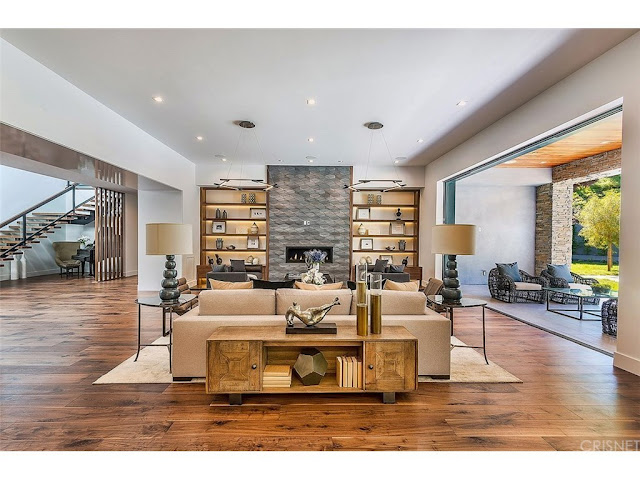 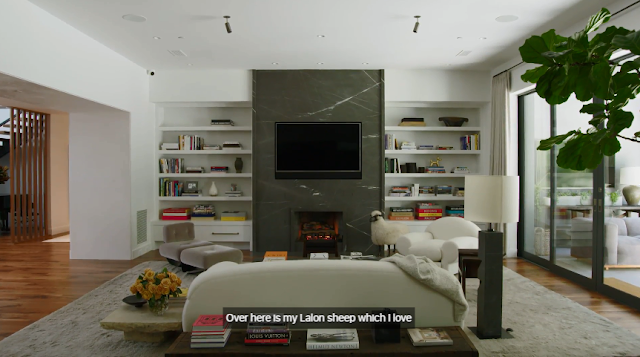 After From AD Video

Gone are the chandeliers, replaced by simple art lights that can be articulated. The fireplace is covered in soapstone and they've changed the box from the long horizontal feature it had been to more square. The television and soundbar are set into a recess in the stone, making it hardly noticeable. Shelves are now white and again curtains frame the doorway to soften the very horizontal lines of the room. 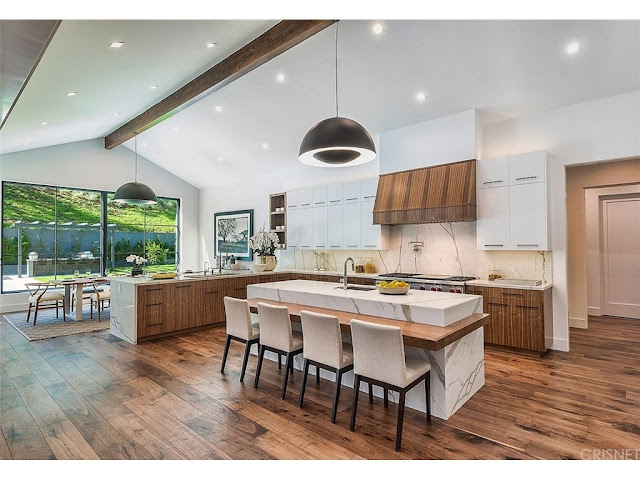 The kitchen. Again I want to point out here that the house is a new build, these images from the real estate listing are staged for sale, but everything in the house - from the floors to the drywall is new. So this kitchen had never EVER been used. 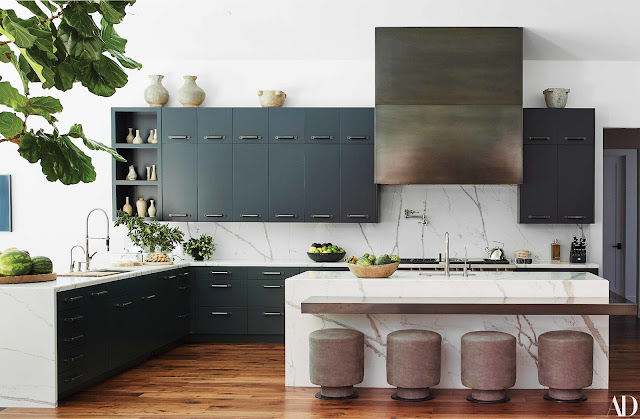 From AD. Kris and Clements Design kept the cabinets, but had them refaced in black, and an entirely new range hood was installed. 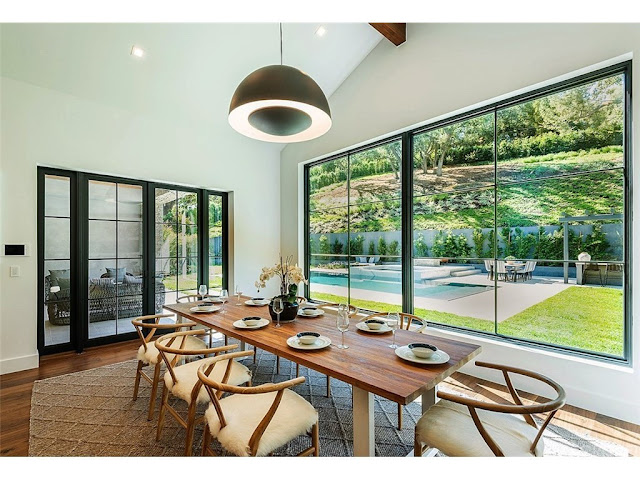 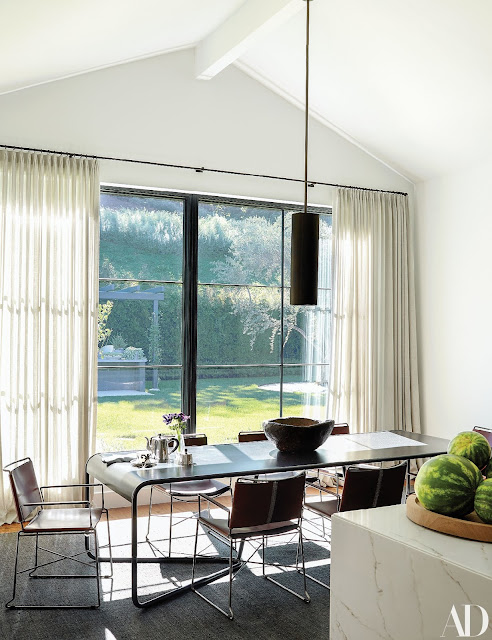 The beam in the cathedral ceiling was painted the same white as the walls and ceilings. Curtains again used to soften those steel and glass windows. 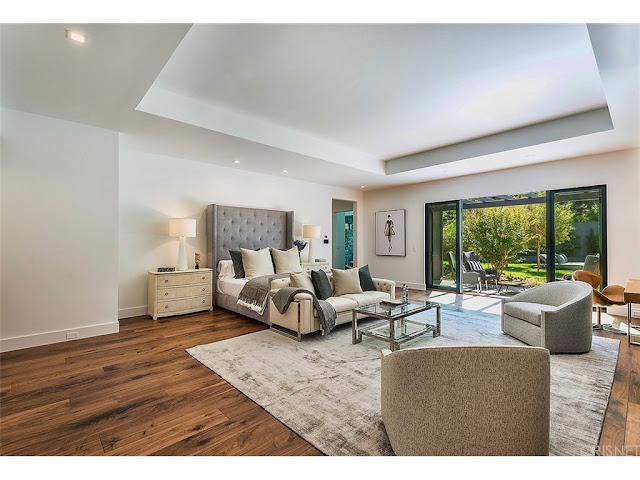 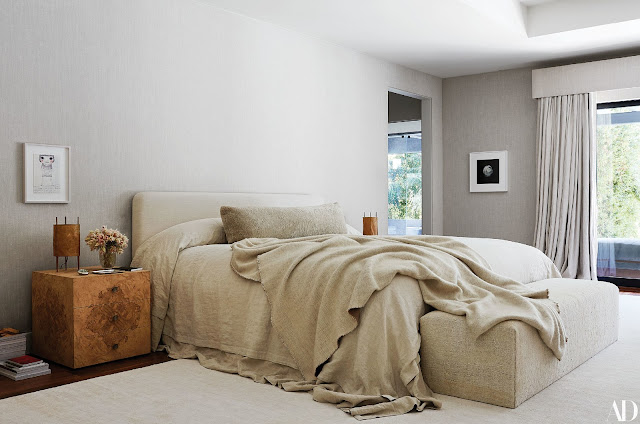 After from AD. Heavy black out drapery on the window with a valance makes the room pitch black when needed. Wish there were more photos of this space. 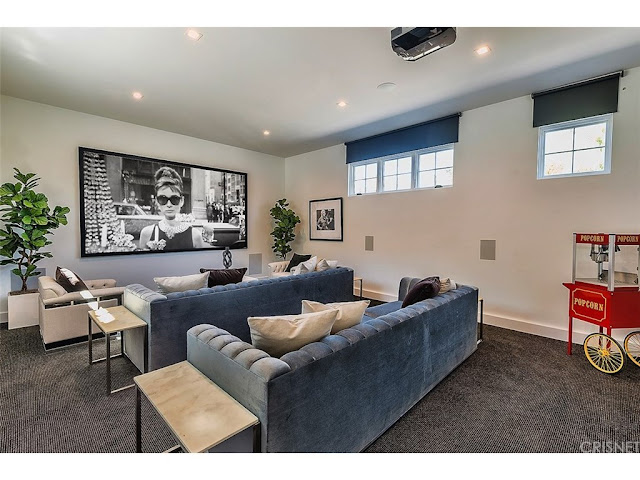 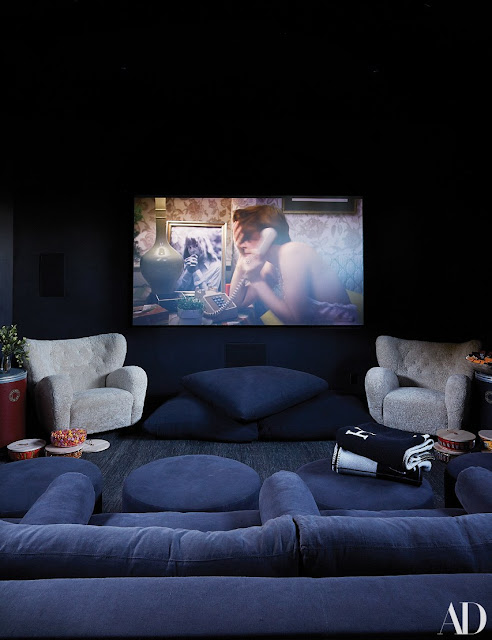 Now, if you're looking to pull this look off for less - join the club. Many of you know that I'm changing things in my own space, and I'm moving to a more neutral and modern mix. I've always loved modern art, and the mix of modern and traditional interiors are some of the ones that I find most beautiful in my collection of "favorite homes".

So when I was digging around Amazon looking for pieces, I was REALLY looking. Looking for myself, and for you! I hope you'll find some lovely in the great finds below - check them out, and buy them if it suits your fancy!