Remember the little teaser I gave you on the "HUGE" story I had for you. Well, maybe huge was the wrong word. What it actually should have been called is long, or complicated, or convoluted, even mysterious ... beyond frustrating, and I'm honestly not even sure I should be wasting time blogging about it, because Lord knows that there is a zillion other stories about the history, decor, inside and outside of Grey Gardens.

I found it hard to know where to start. Probably the best story I've read about Grey Gardens was written by my friend, Joni Webb on her blog Cote de Texas. Go there, read it. It's worth it. She did so much research, and borrowed a lot from other pieces of the story and photos from other well researched posts on the internet. There's no need for me to recreate that.

Where I've decided to start is here: 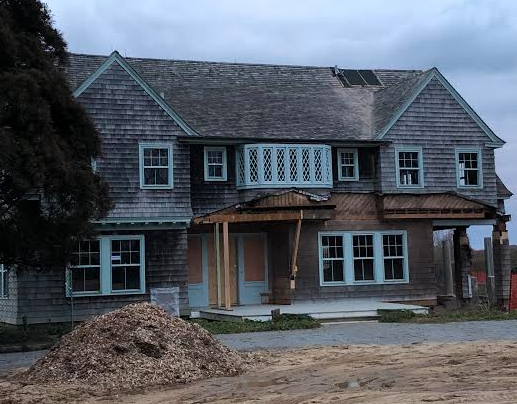 Town and Country Magazine posted this photo, a picture they took from Twitter of an East Hampton resident who was mad as hell that the renovation efforts of Grey Gardens after the sale in 2017, looked as if the entire house was about to be torn down. In truth, the house (after being purchased for $15.5 million) was approved for a massive overhaul by the Village of East Hampton, and it didn't take long before the new owners got started. Somehow though, they've managed to do this without a shred of information about who they are or what was approved.

All we really know about who they are came from their realtor, who shared with press that they were: "a young family who know and love East Hampton and who are eager to respect and restore Grey Gardens."

The plans were shielded from the internet, but contractors hired to oversee the remodel said that the new owners were "adamant about saving every piece of trim and paneling" and "when we took down the chimneys, we saved the original bricks to be reused." The renovation called for taking what was only a crawl space under the house and turning it into a fully finished basement, still the contractor claimed "nothing is changing with the aesthetics."

"They really want this house to go back to the way it was 100 years ago. They don't even want it to look like a new paint job was done."

The plans for the renovation indicated that radiant heat floors were going to be added to many rooms of the house, and that when finished the house would have a total of seven bedrooms, eight full and two half-bathrooms. FYI: The house had 8 bedrooms, and 6.5 baths when they bought it. Oh, and that finished basement? It'll have a wine cellar, exercise and rec room. The mysterious and anonymous buyers hired a landscape architect to establish similar gardens that had become so overgrown.

Having a famous house like this available to anyone walking, driving, or riding their bike down West End Road results in a TON of photos online and in social media. The photo above, for example, just a random photo from a passerby.

When the house was sold, the front of it looked like this: 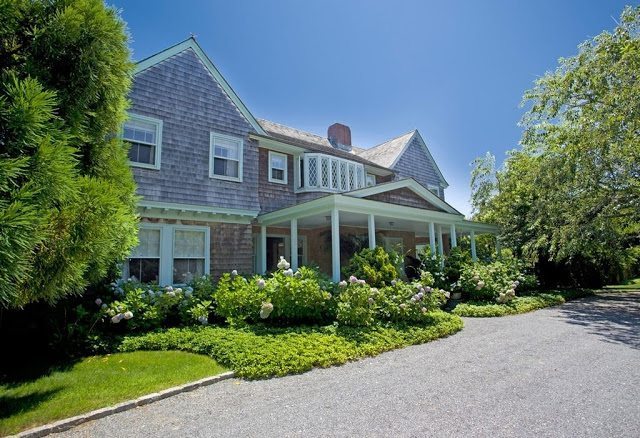 Pretty, right? It had already gone through a massive renovation under the watchful eye of Ben Bradlee and Sally Quinn, who purchased the house from the infamous Bouvier-Beale ladies and lived there for nearly a quarter century before turning it into a popular summer rental. This photo was taken in the summer of 2016, when the house was listed for $19.995 million. By the time it sold (for $4.5 million less than that) it was October. Anyone familiar with New York in the Fall knows that all this green was gone by then.

Quickly after closing, the new owners started their renovation, hired a VERY POPULAR interior designer, and got started working on all the particulars. Month by month, passerby photographers cataloged the changes. 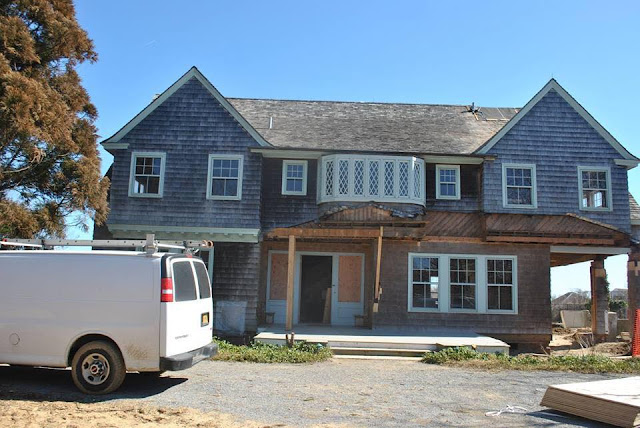 Gone is the porch which wrapped from the front of the house all the way around the right side, under two second floor bedrooms. The brick had been pulled from the chimneys, necessary for the house to be lifted. 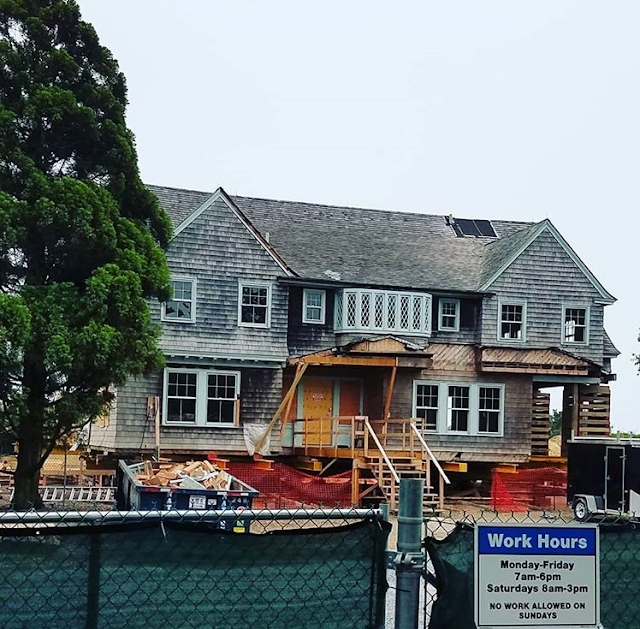 At this point, you can see the house now lifted from the foundation about 6 feet! This was so they could dig out that basement and have the additional living space down there. 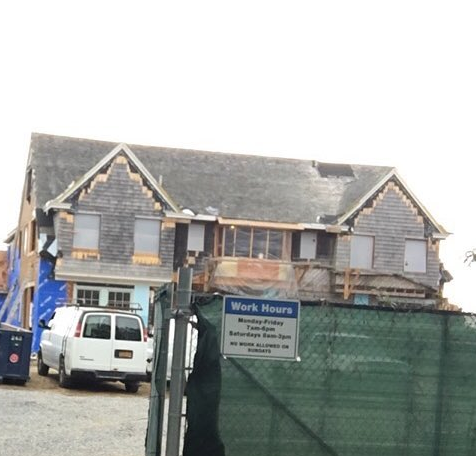 The windows are gone, the house is now placed on the new foundation, now much taller so that the space can accommodate those additional rooms. The shingles are being removed and reconditioned, and over to the left, you can see the big hole in wall where some architectural changes are taking place. Gone is the tall pine tree that had been in front left of the house. 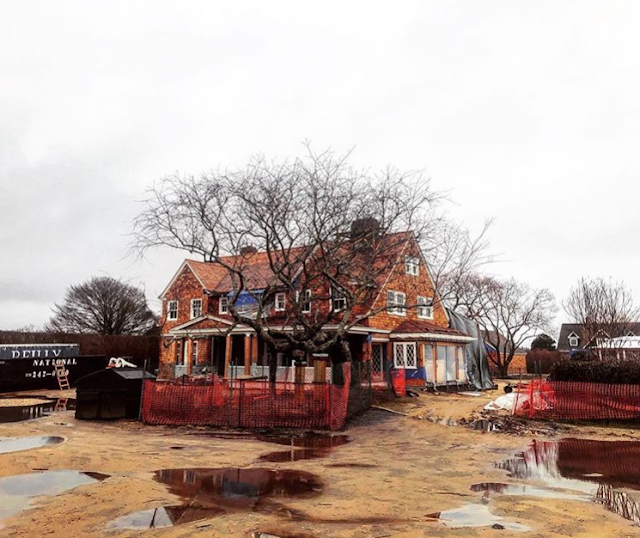 The house, fully reshingled, new windows placed, and the porch is rebuilt. Shingles from the roof are gone, and the chimneys are being reworked. 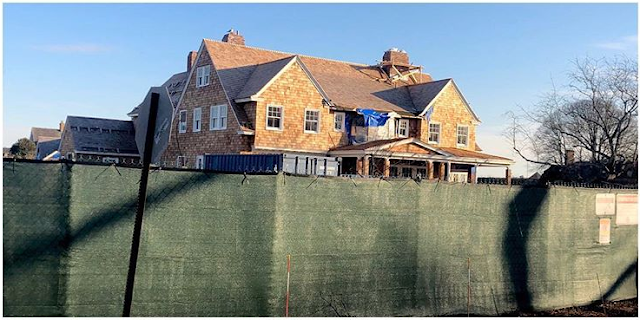 This photo shows the new roof, brickwork still being worked out. 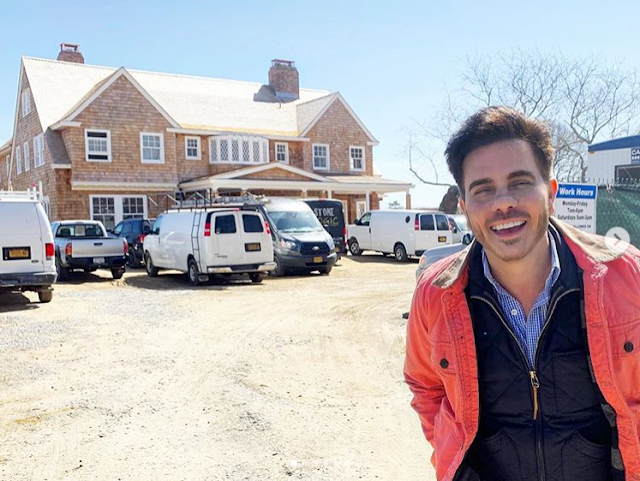 By March though, the house looked good. Nearly finished, apart from landscaping. 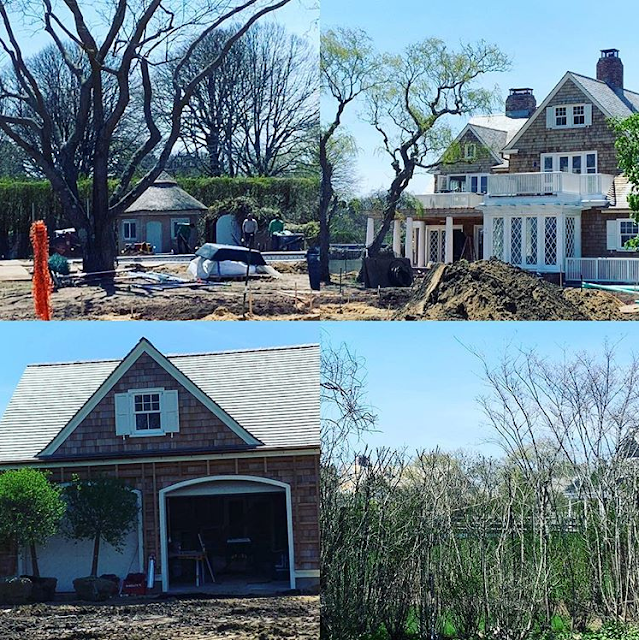 Less than a month later, that would be going in, along with trellises along the new shingles on the house, and shutters had been added. Also, you can see the creation of some new porches on the back of the house. 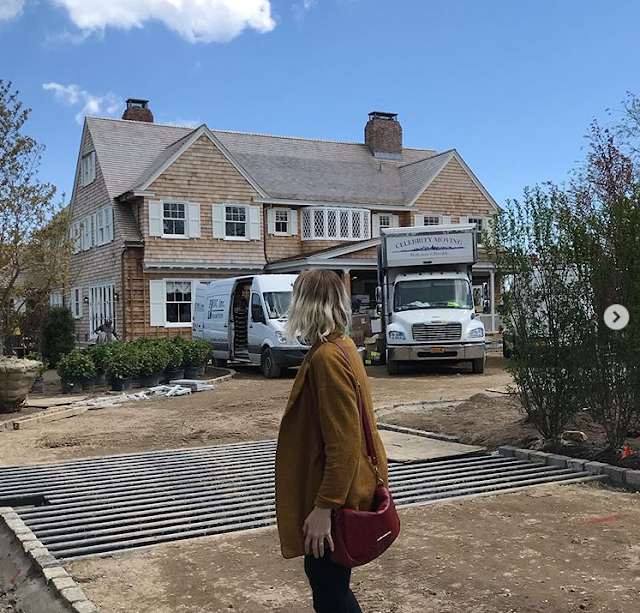 At this point, the designer and their team was actually there unloading the new decor for the house. We talked about the hole on the left of the house from the passerby photo in 2018. Now you can see the set of french doors. 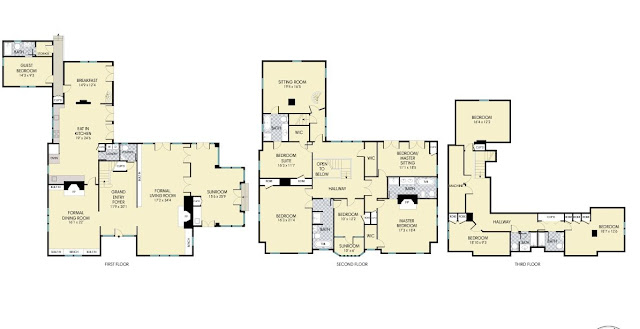 I found this floor plan created for the house before the purchase. The french doors were added to what was the formal dining room. 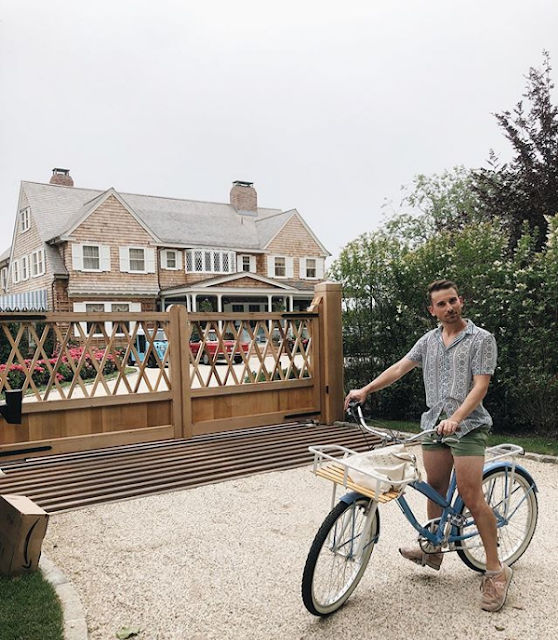 This is likely the most current photo available. The new fence and landscaping are in and looking great. Take a look at the left of the house. A new blue and white stripe awning appears over the french doors that were added to the dining room - if you're wondering who their designer is, that's your biggest clue - and you can see there are some cars there, including a little blue MOKE electric car in the driveway.

But that's where I'm gonna leave this today, and we will pick back up with that little blue MOKE, who probably owns it, and the other pieces I've been able to connect together about what the interior design might look like!

Here are some links to some Grey Gardens-ish interior design items and books that we might be seeing in the next post: